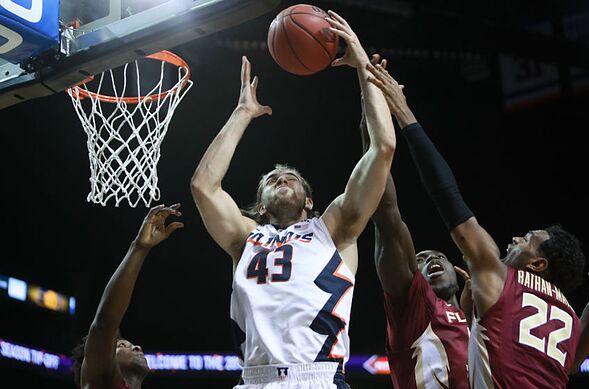 NEW YORK, NY – November 25: Michael Finke #43 of the Illinois Fighting Illini fights for a rebound against the Florida State Seminoles in the first half during the consolation game of the NIT Season Tip-Off at Barclays Center on November 25, 2016, in the Brooklyn borough of New York City. Prior to the 2017-18 season, Finke joined the Grand Canyon basketball program as a graduate transfer. (Photo by Michael Reaves/Getty Images)

Now eligible for the NCAA Tournament, Grand Canyon basketball coach Dan Majerle went and got a ton of transfers from Power-5 programs and beyond.

While the Arizona State Sun Devils and Arizona Wildcats mostly dominate Arizona’s college scene, folks better pay attention to Dan Majerle and the Grand Canyon basketball program. Majerle has been building something special at GCU over the last few years and now, with a group of impressive transfers, freshman, and returners, the team is ready to take the next step as the powerhouse program in the Western Athletic Conference.

Last year, the Lopes fell one win shy of an appearance in the NCAA Tournament, losing in the WAC tournament championship game to New Mexico State

As far as transfers go, there are four guys joining the program from Power-5 programs and a few others from smaller places.

The first guy that needs to be talked about is Michael Finke, a guy I covered a lot during his time in the Big Ten. Finke comes to GCU as a graduate transfer with a ton of experience as a starter at Illinois. In 93 games for the Fighting Illini, Finke averaged eight points per game, including 9.8 last year in 25 starts. He’s a big body with an even bigger motor and a soft shooting touch. Standing 6-foot-10, Finke can make it rain from the outside, shooting 36.2 percent from deep with Illinois.

While I’m sure the prospect of being a big fish in a little pond was intriguing, Finke comes to GCU in the same year his brother, Tim Finke, joins the program as a freshman. “This is the first time we’ve really played together,” Finke told AZ Central earlier in the week.

Since he’s a graduate transfer, he’ll be able to play right away.